The Ageless Wisdom is the global spiritual inheritance of humanity, the collective knowledge, experience and inspired teachings given to us since earliest times. 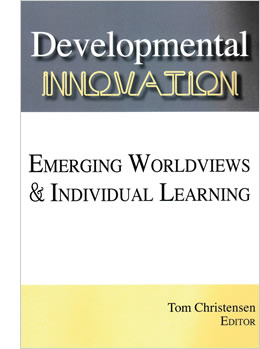 Rosemary Wilkie contributed a chapter on AGELESS WISDOM and SDi to Developmental Innovation. Read on.

“If SDi were provided by the Hierarchy as an update for our times to the Ageless Wisdom, why was SDi needed now? And what does its transmission do for humanity that couldn’t be done now without it?” (Tom Christensen)

Down through the ages, whenever humanity has exhausted its resources and its ability to cope with its problems, we have received divine guidance. The line of great teachers: Buddha, Krishna, Confucius, Jesus, Mohammed, runs like a beam of light through all world faiths and scriptures. They were inspired by higher levels of being they believed was God. They taught love, gave us laws and codes of ethics to live by, and founded the great religions we know today – albeit encrusted now with centuries of tinkering by theologians and political pressure.

Since 1400 there has been a stream of lesser teachers, who took the form of men and women championing successfully some truth or right cause, some human right or correct demand. They weren’t always recognised at the time, but changed our thinking and pioneered new areas of achievement. In the nineteenth century Helena Blavatsky, in The Secret Doctrine, revealed the golden thread of secret teachings underlying all religions, introduced many ideas that flowered in the New Age movement, and bridged the gap between western and eastern cosmology. In the twentieth century, Alice Bailey, also under the direction of Djwhal Khul (the Tibetan), produced twenty-four books – a treasure house of unadulterated ageless wisdom.

The fundamentals have always been true, but each generation has the possibility of testing the strength of the old foundations, conserving the essentials and building wisely on them a structure to meet current needs. We are now in the twenty-first century, with overwhelming new and intractable problems, some of which threaten the very existence of life on earth. Is it time for a new revelation? Could Spiral Dynamics Integral hold the key?

Read the full chapter on Ageless Wisdom and SDi

Download the chapter on Ageless Wisdom and SDi as a pdf

Also see ‘Evolution of Consciousness’ in The Beacon